Our mobile testing site has performed so well, we decided to give it a permanent location as a Drive-Thru Testing Center in the northwest corner of the hospital’s North Parking Lot!

We are always working hard to provide our communities with the safest options for health services. Our Drive-Thru Testing Center will help limit exposure and provide you with a convenient option for testing without leaving the safety and comfort of your vehicle. 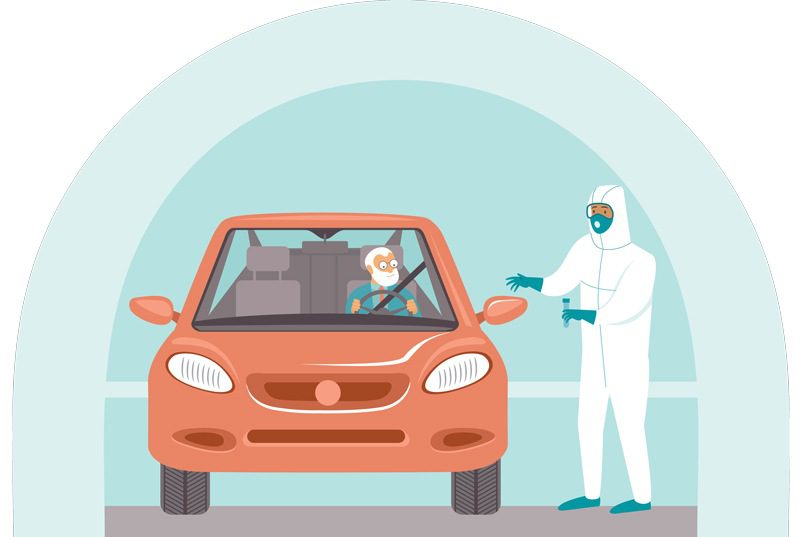 Here’s a list of tests that can be performed at our Drive-Thru Testing Center:

Please note: the COVID-19 Testing Phone Line is a voicemail line only. A staff member will call you back.

What to Expect During the Nasal Swab Test for COVID-19?

The medical professional performing the nasal swab test will insert a long stick (resembling a very long Q-tip) with a very soft brush on the end up your nose and twirl it around for a few seconds in each nostril. The soft bristles will collect a sample of secretions that will be used for testing. The swab must be inserted fairly deep into the nasal passageway because the cells and fluids need to be taken from the entire passage that connects the base of the nose to the back throat to get the best specimen.

Our body is not accustomed to having a foreign object in this area. Some very odd sensations are the result of this. It activates what is called the lachrymal reflects, which simply means it will cause your eyes to tear up. In fact, this is a good indication it was performed correctly. The test is not necessarily painful, but it is somewhat uncomfortable. Again, the test is over fairly quickly so these sensations don’t last long.

The form of influenza (flu) test that St. Margaret’s uses is called a “a rapid flu test,” or more specifically, rapid influenza diagnostic tests (RIDTs). This test can identify whether there is a presence of influenza A and B viral nucleoprotein antigens in respiratory specimens collected. The test produces either a positive or negative result.

Why is a Rapid Flu Test Ordered?

The reason a rapid flu test is ordered is because symptoms resulting from the flu are very similar to those experienced from many other health and medical conditions. Thus, a rapid flu test allows your medical provider to determine whether you’re infected with influenza or from some other condition requiring different treatment. Bacterial infections and viral infections often share similar symptoms, however, medications such as antibiotics are only effective against bacterial infections—not viral. Antibiotics should never be prescribed for a non-bacterial infection and can have adverse effects. The rapid flu test’s ability to rule out other conditions can allow you to receive a more accurate diagnosis and be prescribed the most effective/safest options for treatment.

How is the Test Performed?

The test itself is very quick and involves a medical professional using a long swab to collect a specimen sample from the nose or back of the throat.

The most common reason a sore throat develops is because of viruses. However, strep throat is actually a bacterial infection in the throat and tonsils that is caused by a bacteria called group A Streptococcus (or group A strep). Group A strep live in the nose and throat and can easily be spread from person to person. Not all people infected will experience symptoms or appear ill. Infected persons can spread the strep bacteria by coughing or sneezing.

People contract the illness for many reasons:

Common symptoms of strep infection include:

Some people may also experience a headache, stomach aches/pain, nausea or vomiting. These symptoms are especially common in children. A rash called scarlet fever may also display on some people infected with strep.

A medical professional will not be able to definitively determine whether a person’s symptoms are caused by group A strep just by examining the patient’s throat. A rapid strep test is performed to detect the presence of the bacteria.

The test itself is performed by swabbing the throat and running a test on the swab. The test produces either a negative or positive result and quickly shows whether group A strep is the culprit. If the test is positive, a medical professional will likely prescribe antibiotics to treat the strep throat. If the test result is negative, but the medical professional still suspects strep (a false negative), then he or she may order a strep culture swab. As with any culture, a strep culture will take some time to determine whether ground A strep bacteria grows from the swab.

What is Respiratory Syncytial Virus (RSV)?

RSV is a common, highly contagious, virus. Most children experience an RSV infection by the age of two. For most young children and infants, the infection acts much like the common cold with generally mild symptoms. However, some that are infected with RSV can have very serious, and sometimes life-threatening, complications that include pneumonia and bronchiolitis.

The symptoms of RSV infection mimic those experienced with the common cold, including a runny nose and cough. The following symptoms, however, can be cause for concern. Contact your child’s primary care provider if your child experiences:

If your child or baby is lethargic, overly tired, has fast breathing or has a blue tint to their lips or fingernails, call 911 or get to the nearest ER immediately.

An RSV test is used to detect the virus that causes RSV infection. The type of test that is used at St. Margaret’s to detect RSV infection is a swab test. A medical professional uses a long swab to collect a sample specimen from the nose or throat. Minor discomfort or gagging may occur when the swab test is performed, but there is little to no risk involved with RSV testing.

The test produces either a positive or negative result. A negative test will likely indicate a different type of virus is causing the symptoms experienced.

Many respiratory illnesses present with similar symptoms. Often, it can be difficult for medical professionals to identify what specific pathogen is causing the upper respiratory infection. As such, laboratory testing can be imperative when determining the best treatment to use.  The Respiratory Infection Array Test is a comprehensive test that can be used to detect “an array” or multiple respiratory illnesses—several viral and several bacterial. These are the illnesses the test can help identify:

This Respiratory Array Test is performed using a nasal swab to collect a specimen from the back of the nasal and throat. The test may cause brief discomfort and tearing of the eyes, but otherwise carries very little to no risks.

Additional tests and other medical services may also become available.

NOTICE OF TEMPORARY SUSPENSION OF HOSPITAL SERVICES IN PERU

Effective Saturday, January 28, 2023 at 7am, St. Margaret’s Health – Peru will temporarily suspend all hospital services, including the Emergency Room.

Call 911 or go to the nearest emergency room if you have a medical emergency.