Pain or Pressure in Your Ear?

You May Suffer from Eustachian Tube Dysfunction

If you have ever been on a plane or at a higher elevation, you have probably noticed a change in the pressure in your ears and have chewed gum or swallowed to adjust the pressure that began to build up. This type of discomfort is only temporary and happened because you were not swallowing or yawning at the time of the rapid change in atmospheric pressure, but this example shows the importance of your eustachian tubes and the discomfort they can cause if they are not functioning properly. The eustachian tubes run from the back of the nose in the upper throat to the middle ear. They function as a valve to maintain proper pressure in the middle ear. While they stay closed much of the time, they quickly open and close upon swallowing or yawning to allow the passage of air and drainage of normal secretions. However, when inflammation, swelling, or mucus disrupt this function, pressure in the middle ear will not be normalized and mucus cannot drain properly. When this happens, it is called Eustachian Tube Dysfunction or ETD. Symptoms of persistent Eustachian Tube Dysfunction include ear pain, pressure, fullness, popping, muffled hearing, or ringing. According to Acclarent, it is estimated that a minimum of 2 million adult patients suffer from Eustachian Tube Dysfunction in the United States.

If you suffer from Eustachian Tube Dysfunction, the Acclarent Aera™ Eustachian Tube Balloon Dilation is the best long-term treatment option available for adults. This procedure is safe and minimally invasive. During this outpatient procedure, a catheter is maneuvered from the nose to the eustachian tube where a balloon is then inflated for a few minutes to minimize the inflamed tissues and maximize the opening. Within a few months of the procedure, the eustachian tubes begin to start functioning properly on their own.     According to Acclarent, until 2016 there was no balloon catheter widely available in the United States specifically designed to dilate the Eustachian tube. The options that were available before this procedure included a Tympanostomy Tube, which requires an incision be made through the tympanic membrane to place an ear tube—to provide temporary ventilation of the Eustachian tube, and a Tuboplasty, which is the use of a surgical laser tor microdebrider to ablate or remove the mucosa from the Eustachian tube. Both procedures are more invasive than the balloon dilation procedure and come with significantly more risks, including hearing loss, scarring, chronic perforation and more—all of which results in repeated future office visits and procedures.

This revolutionary procedure is now offered by Dale Chilson, DO, FAOCO 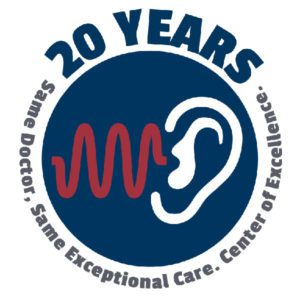 Board Certified in Otolaryngology, as well as, Head and Neck and Facial Plastic Surgery. For over 20 years, Dr. Chilson has provided consistent, quality care. He is the same doctor, offering the same exceptional care as a Center of Excellence. If you experience pain and pressure in your ear as an adult and are looking for a more permanent treatment, then the Acclarent Aera™ Eustachian Tube Balloon Dilation system may be right for you.

To Learn More or Schedule and Appointment, Call Today: